Formation of dyspareunia in women with surgical menopause

In the period of menopause usually starting at the age of about 50 a spectre of violations of women’s sexual health, conditioned by psycho-emotional, vegetovascular and neuroendocrinal changes is established [1, 2, 3, 4]. At the same time surgical menopause may be found in women of earlier age and is a conditional stage of quality changes, accompanied by certain discomfort, namely due to the formation of sexual changes [5, 6].

Evaluation of frequency of dyspareunia in women with surgical menopause.

Studies were carried out within two years, right after surgical treatment. The analysis of anamnesis data of the observed women of two groups has shown that they had practically no reliable differences by nature of diseases they had and by the accompanying pathology. After surgical treatment all patients refused to use hormone replacement therapy (HRT).

For all women a questionnaire implying interview method with McCoy form was used. Simultaneously patients kept a diary of sexual experience and impressions.

During gynaecological examination the level of intensity of dyspareunia (mild, moderately severe and severe) was considered depending on the intensity of dryness of vaginal mucous membrane and pain feelings in sexual closeness.

We have carried out ultrasonography of clitoris zone in the state of rest and at the background of video- and arousing lubricants in the diagnostic system XARIO of TOSHIBA expert level in the mode of grey scale (B-mode) with the use of coloured Doppler carding and determining speed indices. Multifrequency linear sensor 7.0-12.0 MHz has been used.

With the coloured Doppler carding we assessed the peculiarities of parenchymatous blood flow in clitoris (presence, absence, intensiveness and symmetry). We used the scanning angle between ray and vessel from 0 to 40 degrees. Indicators of 3-4 complexes were assessed. Doppler indices: peak systolic speed of blood flow (Vs m/s), index of resistance (IR) and index of pulsation (IP).

The concentration of nitrite anion NO2 has been evaluated in protein extract of vaginal mucous membrane with the help of Griess reagent by spectrophotometric method on photometer Screen Master. The content of the whole protein in samples has been assessed by the method of Bradford M. M.

The carried research has shown that the frequency and spectre of sexual dysfunctions grew in amount after surgical treatment and reached its peak in 2 years after the hysterectomy in women of both groups. The frequency of dyspareunia (85.7% in group I, and 52.2% in group II) and lubrication disorders (85.7% in group I, and 56.5% in group II) prevailed after 24 months of surgical treatment (pic. 1). In 4 (28.6%) patients of group I and in 5 (21.7%) patients of group II anorgasmia at the background of lubrication disorders and dyspareunia of various degree of intensity was observed.

It was established that among women of groupI (after hysterectomy with ovariectomy) the frequency of dyspareunia after one year constituted 64.3%, and in 5 (35.7%) patients the dyspareunia of I degree prevailed, while in 2 years after surgical treatment (when patients refused to pursue HRT) dyspareunia was marked in 12 (85.7%) women, most of them were patients with II or III degree of dyspareunia (50.0% and 14.2% respectively) (pic. 2).

The comparative analysis of the obtained results has shown that the frequency and degree of dyspareunia progressed in women of group I (after hysterectomy with ovariectomy) and reached their peak in 2 years after surgery at the background of atrophic changes in the mucous membrane of urogenitals, accompanied by lubrication disorders. 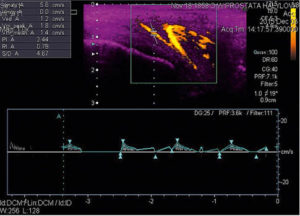 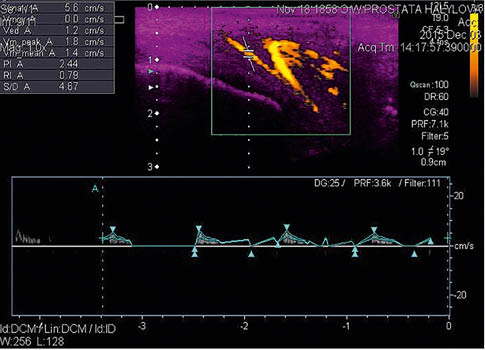 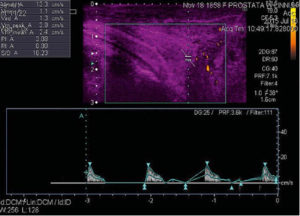 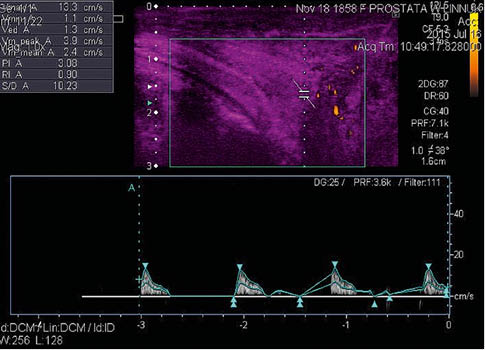 One may assume that at the background of estrogenic deficit, especially marked in women having their uterus with appendages removed more than 2 years before that, the development of atrophic changes in mucous membranes of urogenitals, accompanied by the reduction of lubrication, formation of dyspareunia, and reduction of libido and anorgasmia, further aggravated. 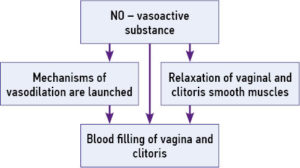 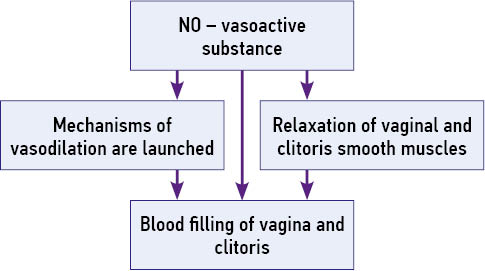 As it is known vasoactive substance – NO is an element in the formation of series of biochemical processes; their consequence ensures the increase of concentration of calcium inside a cell, which is the culmination in mechanisms of relaxation of smooth muscle tissue for the achievement of sexual arousal (scheme 1). Violation of these mechanisms influences the formation of sexual dysfunctions, including dyspareunia in women with surgical menopause.

Depending on the degree of oestrogen deficit the production of nitric oxide (NO) by endotheliocytes of vessels is reduced. Under the influence of NO the mechanisms of vasodilation, relaxation of smooth vaginal muscles, blood filling of vagina and clitoris, and achievement of adequate lubrication are launched, while during the reduction of its levels all these mechanisms are violated.

The data we received has allowed to get convinced that the violations in this system of interconnections, conditioned by age deficit of oestrogens and androgens (especially marked in women after hysterectomy and ovariectomy), lead to the development of atrophic changes from the side of urogenital tract and serve as a «launching mechanism» in the emergence of the sequence of sexual dysfunctions in women of this age group. There is no doubt that the circle model of interconnections and interrelations prevails in the formation of sexual dysfunctions. Every causal factor directly reflects the further changes, keeping the patient in a «vicious circle» of cause-and-effect interrelations (scheme 2). 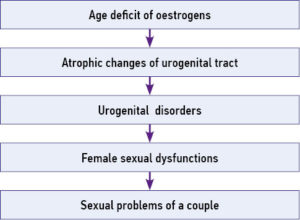 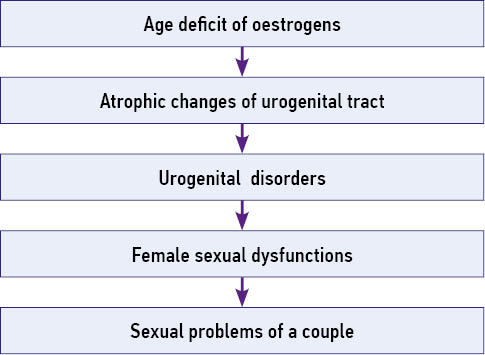 The obtained data has shown that the violations in the state of sexual health, to larger or smaller degree of intensity, were established in almost all examined women after the carried out surgical treatment. Their emergence led to the formation of discrepancies in partners’ sexual relationships.

It is important to note that sexual dysfunctions in most of the examined patients were combined with the state of disappointment, reduction of self-confidence, depression, and irritability, and conditioned the emergence of psycho-emotional instability and depression in many of them. However, women mostly did not pay attention to these violations, and did not turn for specialty sexological care. At the same time 11 (78.6%) patients of group I and 19 (82.6%) patients of group II associated the significance of sexual relations and sexual demand with the indicators of life activity.

The carried out research confirms the necessity of adequate actions on timely prevention of sexual dysfunctions in women with surgical menopause, their diagnostics and correction, especially significant at early stages of their formation with the use of recommendation of the International Community of Menopause.

Therefore, we got convinced that the surgical menopause is one of the most persuasive evidence, which confirms the presence of direct relation between the changes in concentration of sexual steroids and the state of woman’s sexual health.

In 85.7% of women in 1-2 years after hysterectomy with appendages in 52.2% without appendages the background of oestrogen deficit, reduction of nitric oxide, reduction of speed of voluminous blood flow, reductions of lubrication, and atrophic changes from the side of urogenital tract, dyspareunia was formed.

Reduction of blood supply of vulva and vagina at the background of oestrogen deficit in menopause leads to atrophic changes in vagina, reduction of vaginal lubrication, insufficient vascular reaction of clitoris, formation of female sexual dysfunctions and problems of a couple.

Therefore, FSD as a consequence and as the evidence of quality changes in women’s different systems, including urogenitals, in menopause are formed by the principle of «vicious circle».

Reasoning of individual approaches to correction and removal of the emerged violations requires arguments and has to be adapted to disharmonious expressions of this age period with the inclusion of adequate psychotherapeutic aid. Treatment has to be complex and take into account the general state and age changes (including improvement of clitoral sensation and vaginal lubrication) of a woman and psychological problems of spouses in a single context.

Timely prescription of system and local menopausal therapy (when there are no contraindications) with the use of gels and lubricants with hyaluronic acid, PRP-therapy – is perspective with the purpose of both prevention and treatment of sexual dysfunctions and urogenital disorders in women with surgical menopause.